If you want to break into the music industry or record songs for social media, having superb recordings of well-written songs is a crucial advantage. As soon as you start recording music at home or even in a professional studio, you’ll discover that it’s not as simple as it appears. A lot of effort and experimentation is needed to get it just perfect.

Many people believe that music production is a costly undertaking, and there are a lot of misconceptions about the process. However, this isn’t necessary. You can utilize websites like Online Audio Converter, an inexpensive and quick solution.

We’ve collated tips from experienced musicians to help you have a good first singing session in this article.

Warming up your voice can make the difference between a good performance and a fantastic one. While several technologies are available now that can help you fix a subpar vocal track for mixing, you’ll save a lot of time and effort by capturing the greatest raw performance possible.

A simple home studio has become a lot less expensive and time-consuming to build, thanks to technological advancements and a wide range of pro tools control surface options.  It is essential for a vocalist to record themselves. Using a microphone to record the voice lets you hear things you’ve never heard before. Of course, we all know that our voices sound very different from how we perceive them in our heads. If you don’t know how your voice sounds when you record it, you’ll have difficulty getting it right the first time. Just an online editing software, an audio interface, a microphone, and headphones are all you need to record.

It may be tempting to add reverb and other effects to your vocals. However, it would be best to record your vocals “dry” (no effects added). Recording a “dry” signal will provide you with more alternatives when it comes to mixing your vocal track. If you apply an effect to a track while it’s being recorded, you’re stuck with it and won’t be able to change it later.

To help you focus, wear headphones and experiment with different recording locations to determine what works best for you. A room with a well-balanced tone is frequently preferable to one that is dead at some frequencies but boomy at others. What could be deemed a “nice setting” for mixing isn’t always the best place to record acoustic instruments, which require some room interaction to sound their best.

When It Comes to Microphones, Less Is More!

When you utilize more than one microphone on the same sound source, you get all kinds of strange phase cancellations. When microphones are not properly phase synchronized, they cancel each other out, resulting in a thin, nasal, and unpleasant sound.

Instead, use only one microphone and pay close attention to what you’re hearing. If you don’t like the mic’s sound, move it around until you reach the sweet spot. To phase align the overhead mics, make sure they’re at the same distance from the snare’s center. You can use a string or a mic cord to measure the distance.

While Recording Vocals, Turn Down the Volume

Many people make the mistake of recording too loudly with the mic pre-amp, resulting in clipping. This is frequently due to their fighting the loudness of the music track they are recording over, which is already excessively loud. The solution is to lower the volume in your software so it peaks at -20 to -30 dB, then lower the strength of pre-amp so that vocals peak at -20 dB. You’ll want to turn up the volume on your headphones at this point to ensure that you can hear everything.

This gives you enough headroom for mixing, so you can relax knowing you’re not overpowering your microphone or A/D converters while still having enough room to mix. This is referred to as gain staging. 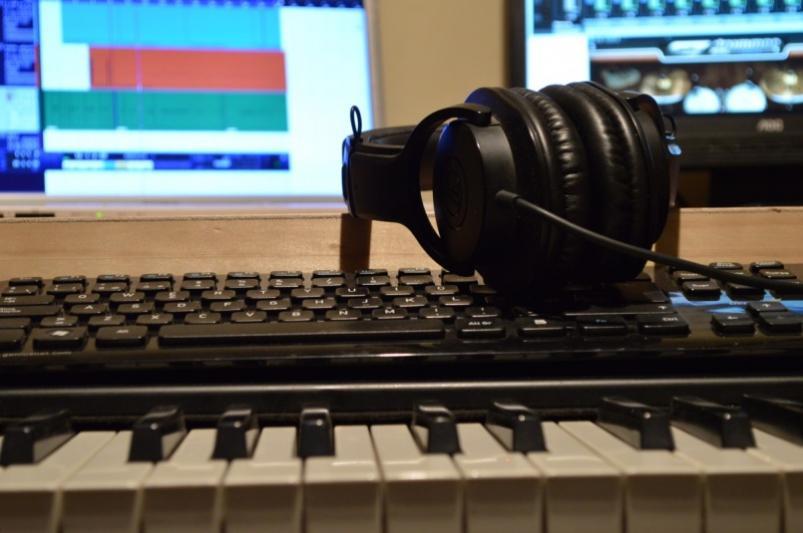 Mind the Wind from Plosives

It can quickly damage a recording, even with a pop-screen on the mic. Tilt the microphone back a few degrees to avoid this, so the diagram isn’t right in front of your mouth. Practice singing “P” sounds with your hand a few inches away from your lips. You’ll learn how to enunciate the plosive without having your breath hit your hand.

Make a Bunch of Recordings

Making many tape versions is crucial for all first-timers in music recording (or demo versions). It’s easier to edit music elements separately and combine them than re-record your complete song. Furthermore, you won’t control every instrument playing while singing or performing the piece’s primary theme. You’ll save a lot of time (and money if you’re renting a studio) if you make many recordings.

Organizing is important when mixing. Use software to assign each line to different tracks, such as vocals, lead guitars, rhythm guitars, drums, and background vocals. You’ll be able to identify errors when you hear them this way easily.

Before a vocal recording session in a studio, you should be well-rested, as with anything important. Make sure you get at least two good nights of sleep before your session. It’s also crucial to keep your voice in good shape. Avoid talking too much or practicing too much two days before the session. Dehydration, reflux, and excess mucus can be caused by alcohol, coffee, and dairy products, so avoiding them can help your voice. Also, remember to drink plenty of water!

A recording is a skill that improves with practice, just like most others. As a result of this article, you now have a solid understanding of how to record your first song. Finally, enjoy yourself during the process.

Table of Contents show
Warm-Up
Practice Recording Yourself
Go in Completely Dry
Examine Your Recording Space
When It Comes to Microphones, Less Is More!
While Recording Vocals, Turn Down the Volume
Mind the Wind from Plosives
Make a Bunch of Recordings
Mixing
Vocal Health and Rest
Conclusion